A bit of history

On October 12, 1944, Athens celebrates its liberation from Nazi troops. On the Italian front, the same day, the British Army puts 500 guns against German positions for 2 minutes to celebrate the event. All Greek ships, but also many allies that are onboard, beat their sirens solemnly.
Unfortunately for the Greeks, the war will not end that day. A young, much tougher, would begin to refute the hopes of the afflicted Greeks for democracy and Laokratia, after 4 years of triple martyrdom.
It was clear that the English would not allow the left to be presided in Greece. In a telegram to British Foreign Minister Eden, British Prime Minister Churchill writes:
"Given the price of which katebalamen epitychwmen by Russia to echwmen free hands to Greece, it should not be distaswmen to chrisimopoiiswmen British troops to ypostirixwmen the Greek basilica Mr. Papandreou's kybernisin.
... I am absolutely convinced that we will echwmen Sygkroysin with the IPU and that we must not prospathiswmen to apofygwmen it, provided that you eklexwmen welcome to the ground...» 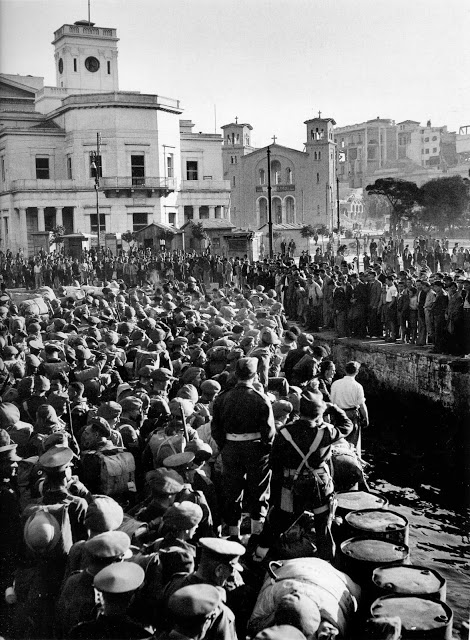 A few days after the departure of the Germans, the British arrive in Greece, headed by Lieutenant Scobie. The Greek people greet them with cheers and cheers as they see them as allies and saviors. None of them can imagine how a new "possession", British this time, had already been decided.
At the same time, Marshal Alexander, leader of all the forces in the Mediterranean, releases the Third Mountain Brigade from the Italian front and sends it to Greece. The third Mountain Brigade (or Rimini Brigade) has been formed by the Greek government in exile in Egypt during the war and has come from confidants to the British and to the military king, following the suppression of the Movement and the Purges made to the Greek troops of the Middle East. The composition is purely right and is the only real military unit available to the Greek government, together with the Holy company, a military "Special Forces unit", which is also set up in the Middle East.
At the same time, gendarmes and officers from all over Greece flock to the barracks of Makrygianni and the Gendarmerie school, where quietly equipped
It is obvious that the great power of Elas is frightening the government that understands that the ELAS must be dissolved and in its place to establish a regular army that can control. However, in order for this to happen, both the edes of the Zerva and the third Mountain Brigade should also be dismantled.
But while the government's initial plan is this, Churchill is being ordered to G. Papandreouas excluded from the dissolution of the Mountain Brigade. The IPU reacts and opposes the creation of a national army which will comprise from one another the forces of the Third Mountain Brigade, the Edes and the Holy Company and on the other a brigade of ELAS with a force equal to the sum of the other Forces.
In this ELAS proposal, Papandreou is proposing something that could not be accepted by ELAS. While agreeing with the idea of setting up the national Army from the above bodies, it nevertheless grants the ELAS once the ¼ of the forces of this army.

This proposal is rejected by the IPU which, on the night of 1st to 2nd December, withdraws its ministers from the government. At the same time, the Central Committee of the IPU decides to organise a rally protest in Syntagma Square the following day, Sunday 3 December

The government initially gives permission to organise the rally, but Sunday morning revokes the permit on the grounds that the rally is the beginning of "aseries of revolutionary acts which are intended to katalysin the state" 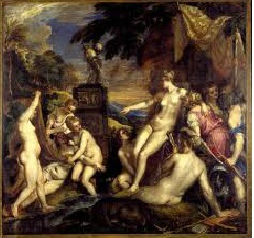 But it's already too late. Syntagma Square and the surrounding streets have been flooded by thousands of people with flags, banners and placards. The dominant slogans are "no more Possession" and "Papandreou quit" 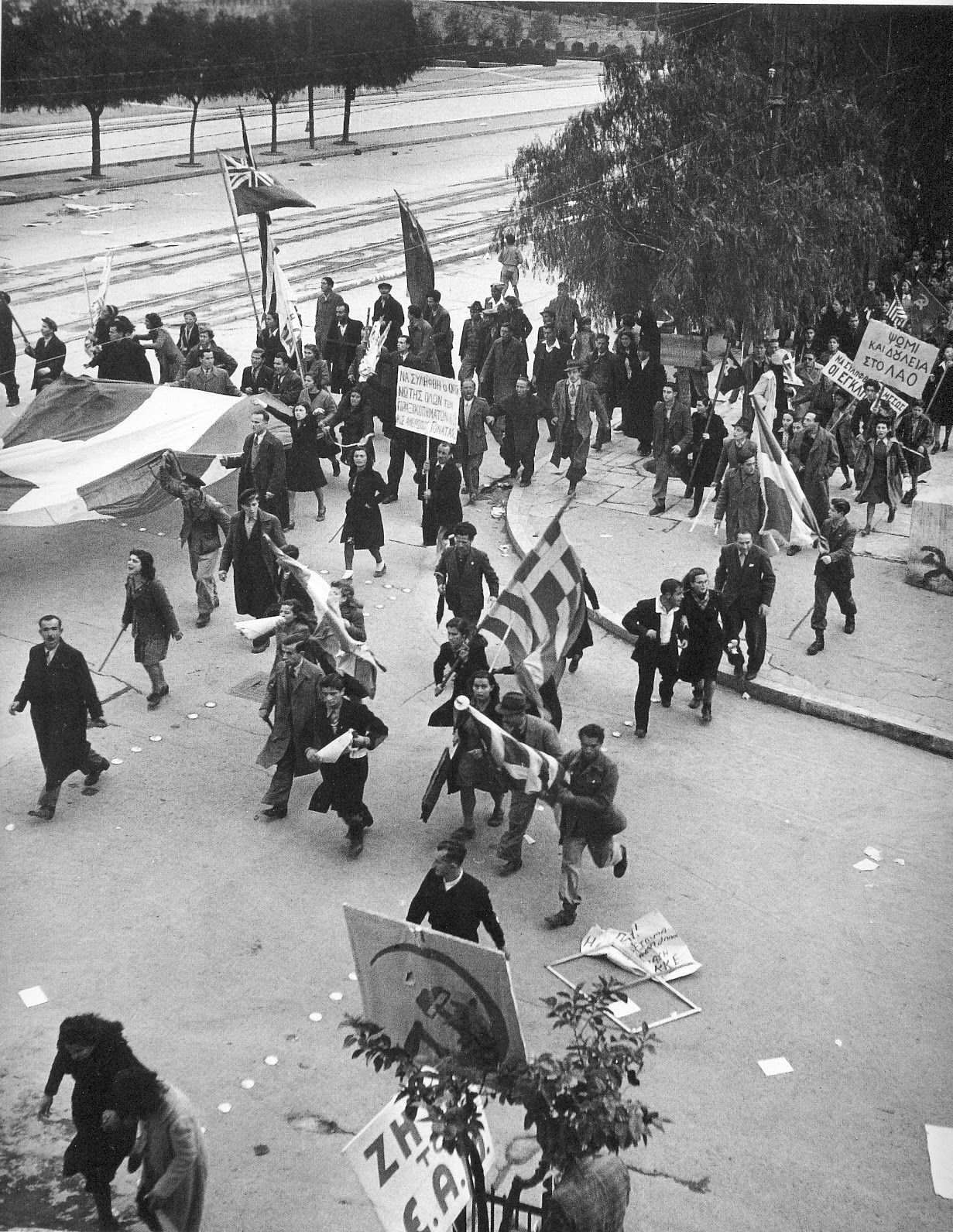 Police officers are barricaded at the entrance of the building, the roof and the windows of the Police Directorate (which was then at the junction of Panepistimiou and Vasilissis Sofias Avenues), on the roof of the house and on the sidewalk of Building, to the side of the Unknown Soldier. Besides the policemen, in the surrounding streets there are English battle tanks
The first clashes of demonstrators with police manifest themselves when the crowd, trying to get from the surrounding streets to Syntagma Square, is prevented by police forces. After a while, the Police department windows and the other police fortifications are starting to get shot. 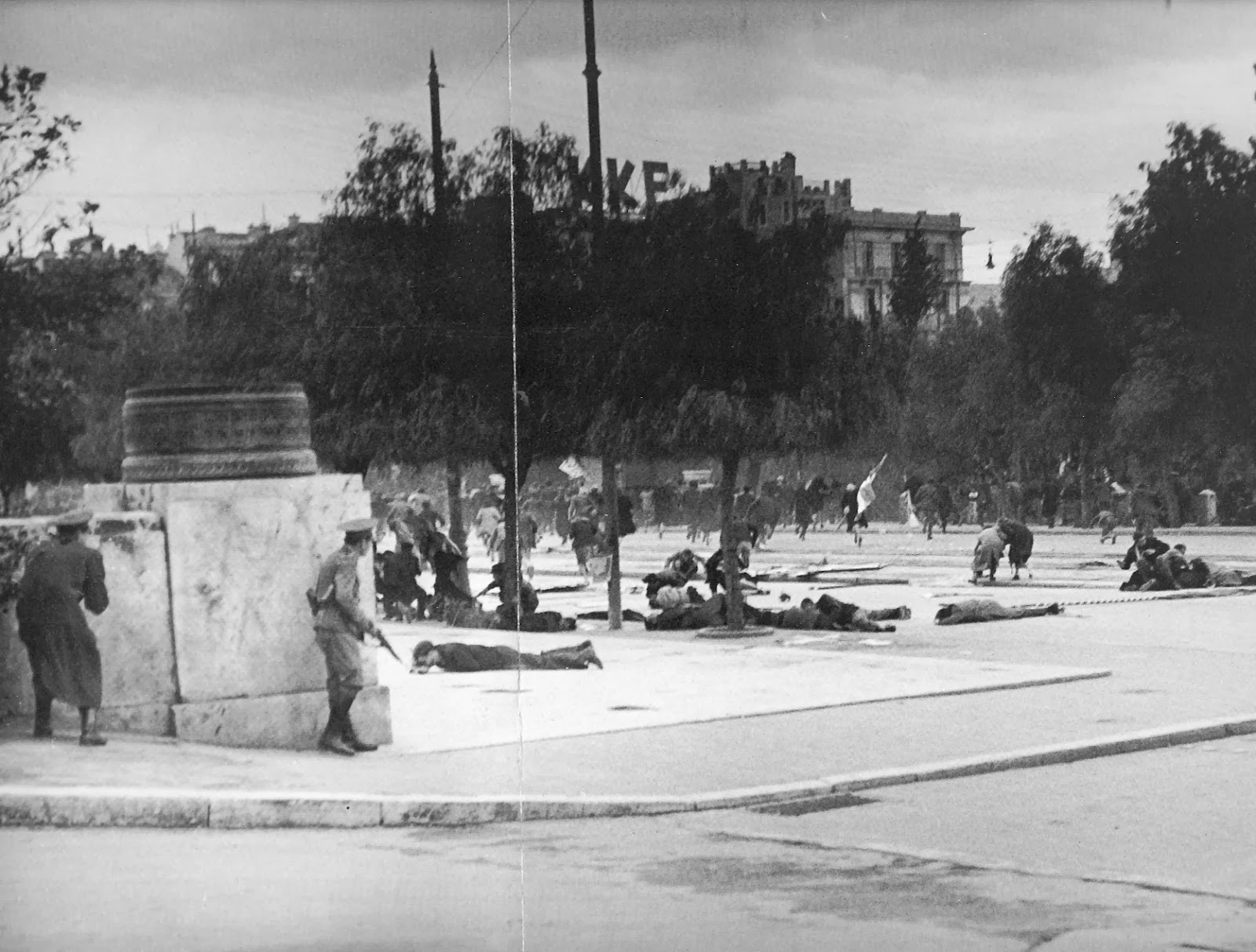 Testimonials
Written by Melpo Axioti in her book "Answer to 5 questions": "next Ap΄ta Palace policemen and fascists at that moment shoot us in the flesh. Girls then show their breasts and shout: beat here! We're unarmed! and the Fascists Varun... The dead are now falling around--around us--a ground, like sparrows. Foreign correspondents stand ecstatic. An American in a Chyma uniform and ARPA a cop gun that was ready n΄anapsei. Another American behind tank English photographing the EAM's banner that weted in slain blood... Many of the polismans throw their weapons at the demonstrators and the demonstrators raise their hands. The English around – around and on the tanks, in the "Great Britain" on the sidewalks, among the crowd, flegmatikoi everywhere and dignified and watch our murder, how Thastekan to watch movie film. At the end – they finally take part. They're picking up their trucks, wounded and stronged. They were the first hostages. In a few days Ginikan thousands».
But other eyewitnesses who certainly could not be accused of filokommoynistika feelings, assert that the attack against the unarmed crowd was unreasonable and unjustifiable. One of them was the Greek-born Mr. Kouvaras who came to Greece in the spring of ' 44 with a special mission of the OSS service (the US Secret Service during the war). 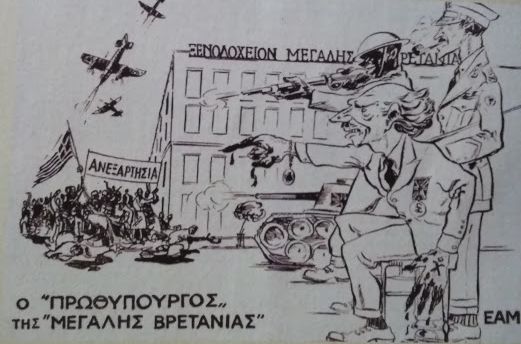 He attended the events of December 3, 1944 from the balcony of the hotel "Megali Britain" and writes: "I saw the world coming in line with its flags – Greek, American, British and Russian – ahead. It was a gigantic convoy, but the demonstrators proceeded with order singing rebel songs and chanting slogans. They were coming west from Panepistimiou Street and they tried to get into Syntagma Square turning left on Othonos Street. The police stopped them. The huge convoy began to move again to enter the square, descending the steps leading from the monument of the Unknown Soldier. The police again stopped them and the convoy started moving again... The front of the rally had reached the edge of the square where we were, and as I watched carefully, I heard the Chiefs talking to the police, just ten meters from where we were standing. We have tried to follow the debate that helded at a high tone, but given the circumstances, the situation did not seem exceptional. The demonstrators sprwchnane to enter the square, but there was no fighting. Suddenly a command "pull back" was given with a striggli, military voice and all the policemen retreated about 20 meters, knees and started shooting! The fire was thick. Two hundred policemen were at the same time, most with automatic... ".
But also the journalist M. Fontor in his response that was published in "New York Post", on 17/2/1945, writes: "in 25 years I have seen almost all the revolutions of Europe. This was the most peaceful and civilized revolution I have ever seen until the police started shooting and the English intervened ".
The envoy of "Chicago Sun" writes: "it was a peaceful and unarmed protest of the people and this is so certain that women even brought their young children with them. Under My window I saw with my own eyes the facts... The heroism of this people is unimaginable. On his feet and on his way to the designated place of the concentration "
The man who ordered the fire that Bloody Sundaywas the then director of the police Angelos Evert, father of Miltiades Evert and police director of Athens on German occupation. In an interview he gave in 1958 he confessed that he, based on government orders, gave the order for the policemen to strike the demonstrators.
The final report of the murder attack was 28 dead and dozens injured. The night that followed was full of terror. Gunshots were heard from everywhere. British chariots rolled thunderously in the streets 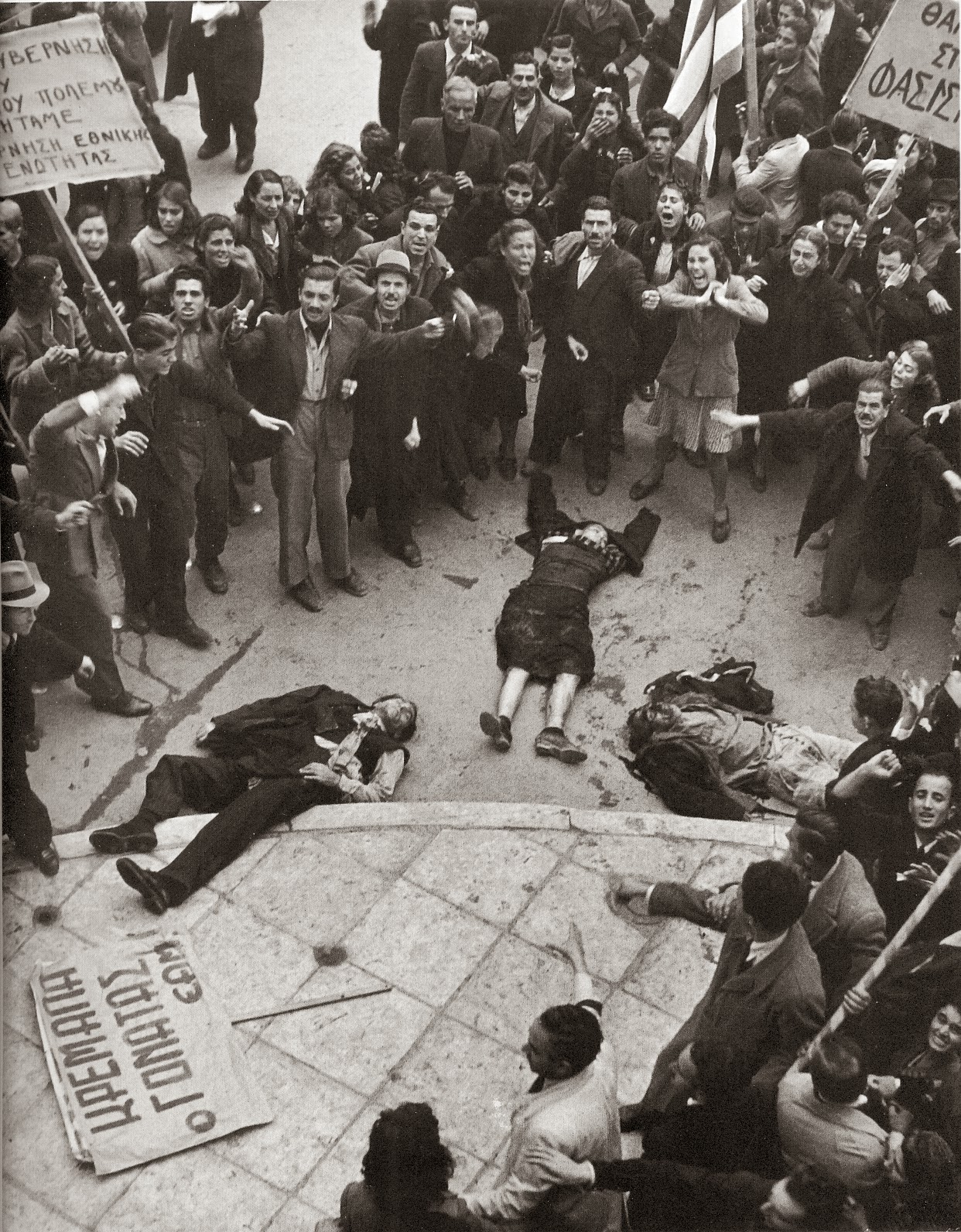 The role of the British
Revealing the intentions of the British and their premeditated plan is the message Churchill sent on 7 November 1944 to his minister on foreign Eden: "in my opinion, I expect a conflict with the IPU and will not We must avoid it, provided we choose our territory well (space – Time – design).
On 5 December 1944, by telegram to the English ambassador to Athens Lipperjust, he writes: "You must motivate Papandreou to do his duty and assure him, that appropriate will ypostirixwmen him with his powers. The era has now elapsed in any Omas Greek citizens capable to thwart the exegersin of the mob. His only elpis is to work our ICU in the aposobisin of possible indifference (...)
I entrusted the whole issue of the defence of Athens and the preservation of the legal order to Stratigon Scobie and assured that he would enischyswmen him with Osas forces needed to do so. Both you and Papandreou need to comply with his directive, with regard to public taksin and security.
you have to oblige Papandreou. If he resigns, imprison him until he's recovered, when the battles are over. He could just as well be sick and no one could reach him. "
In the Scobie, he writes: "You are responsible for maintaining order in Athens and you have to neutralize or destroy all the EAM-ELAS teams that will approach the city. Take all the measures you deem useful to ensure control of the roads and to circle all troublemakers groups. [...] Do not hesitate to shoot any armed who will try to challenge the British prestige in Athens or the Greek prestige on behalf of which we act. The best thing, of course, would be to co your orders from some Greek government, and Lipperjust is now asking Papandreou to stay in his place to help you. do not hesitate, however, to act as if you wherever in a conquered city, where a local rebellion would have erupted. "
The next day
The next day, on the 4th of December, the general strike that the IPU had announced from 2 December and at the same time celebrated the funeral of the victims of the previous day. The funeral sequence takes place in the metropolis of Athens and then the funeral procession is directed towards the constitution. Thousands of people accompany their dead singing the funeral march "Epesate victims..."

At the top of the procession stands out a banner that holds three young hearties women and which reads: " when the people are in front of the danger of tyranny chooses or chains or weapons – EAM" 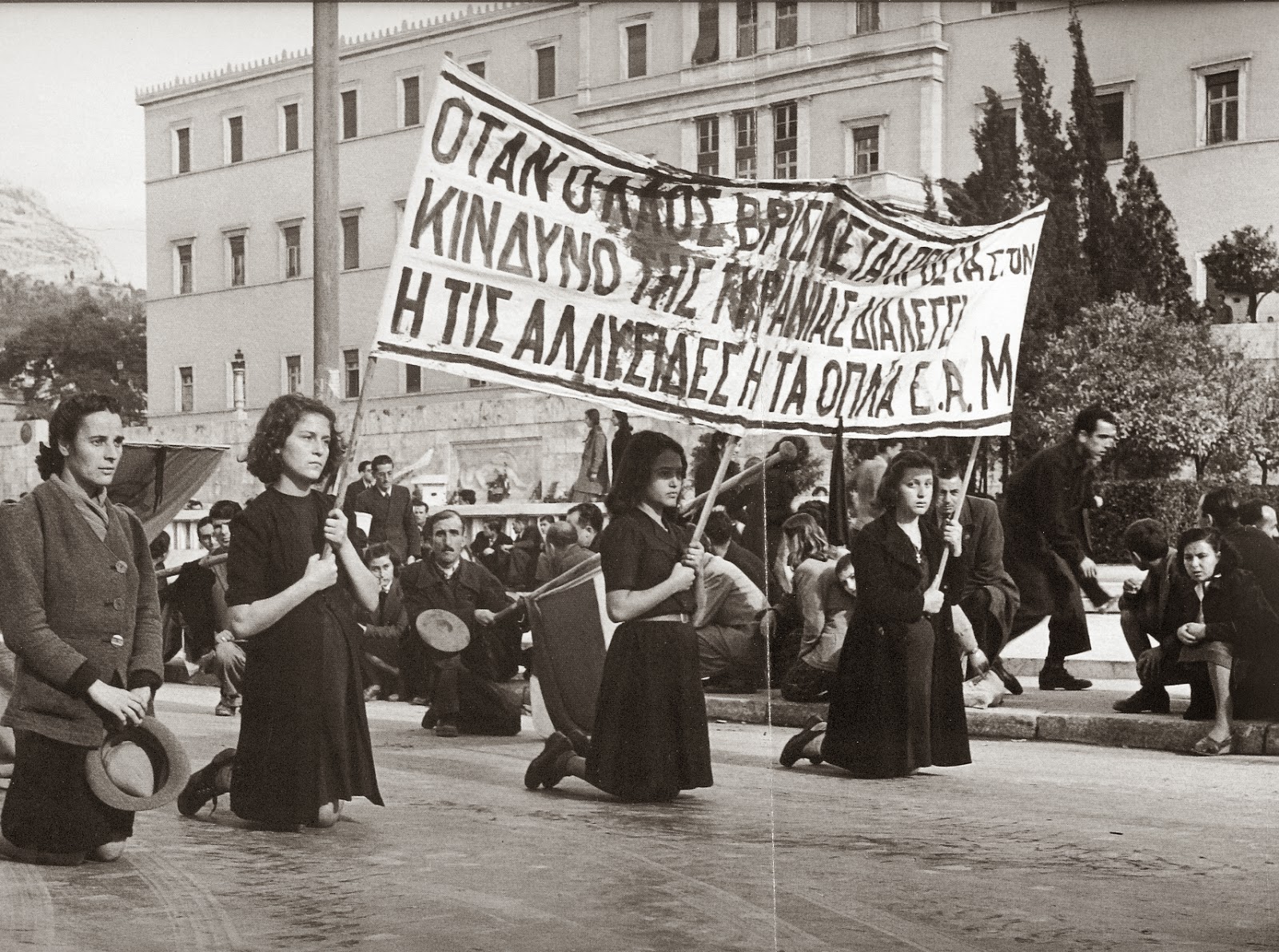 The new war has already begun...

SOURCEhttp://atticavoice.gr
Click to expand...
It has not translated perfectly but a stark reminder of what was going on at the end of the s cond world war, interestingly in a recent Greek lesson the tutor was explaining about the mass exodus of people from Kefalonia; were all aware of the Secong world war impact on the island but what I did not realise was following this the civil war in Greece between the communist East and the Western powers actually caused more blood shed and cruelness with families infighting each other and then the great 1953 earthquake struck Kefalonia.
It was no wonder so many left for America , Australia etc. during this period of time.
You must log in or register to reply here.
Share: Facebook Twitter Pinterest WhatsApp Email Link
Top