The diary wrote December 6, 1941​
A true martyr to the Mother Earth of Kefalonia, open from the picturesque fishing village of Katelios and opposite the Cape of Munda lies still the British submarine "Perseus" showing a naval adventure of exceptional interest. The shocking shipwreck stirs the past and its interesting graphic story seems so vivid that it finds it difficult to get into slumber! 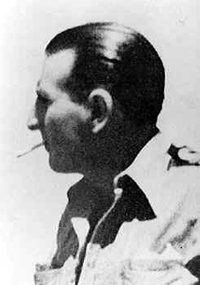 A tragic coincidence, with the Kefalonian lieutenant who, in wanting to acquire war experience, stays in the wet grave of his homeland on the day of St. Nicholas on the eve of his feast, composes one of the most mythistorimatikes and shocking Stories of the island while promoting naval and historical research.
The story of
The English submarine Perseus was launched from Malta on 24 November for an offensive patrol mission in the waters of the Ionian Sea. Its final destination was the Port of Alexandria. For this reason, apart from the permanent members of the crew, there were two passengers.
The English stoker submarine John Capes found in Malta for a personal affair and returned to his base and the Greek lieutenant Nicholas Merlyn who was going to Alexandria to take over the command of a Greek submarine and considered his journey with Perseus an excellent opportunity.
On the evening of December 6, 1941 the submarine sailing to the surface openly from Lixouri hit an Italian mine. Immediately from the rupture created the explosion began to enter water and the submarine began to sink. These very difficult times only John Capes managed to find a way out of the sunken ship.
Using a respiratory device Davis (Davis submerged Escape Apparatus) managed to be found on the surface.
Wounded, swam several miles to the shore where he was found and helped him.
In fact, he was hidden several months ago by the Italian occupation authorities and helped him flee to Turkey.
The history of the submarine Perseus has already been included in the works of the great Karabografoy Milan in Zakynthos honoring the dead that were lost, highlighting the submarine and its history lying dead in the waters of Katelios and asking again to revive Waking memories of the most difficult escape.
The great artist and researcher Antonis Milan has istoriseied through his works the seamanship and the sea two elements that flow into the veins of the Greek and determined his course over the centuries.
The long-term research in commercial shipping through his paintings has been studied and already the Ministry of Mercantile Marine issued a collector's book with works by the great Karabografoy Antonis Milan. He is the eminently modern Greek karabografos who or until now His effort aims at the systematic depiction of all naval and commercial vessels from the pre-history until the 20th century, while in his museum are exhibited all types of Greek ships from Nicaraguan in the 2nd millennium BC.
Foreign visitors and those who undertake a dive in the wet tomb of the shipwreck stand with interest and thoughtfulness in the face of an original story that resembles a fairytale.
The residents in the region of Katelios who know well its history consider that the shipwreck has become one of the most characteristic tourist attractions in southern Kefalonia and has been evaluated as an important and popular dive point for Greek and foreign divers, but also for diving schools and yet consider that the state has not shown any practical interest.

Mesopelagic with the clock stopped on the island of navigators that never..... "When sail do not feel terror.." He seems to want a piece, to want purpose again and captain, crew and extent.... He asks not to be lost in the voice of time..!
"With the raft of Dyssea.... in the footsteps of ancient shipwrecks" Let's weave the myth with history by showing and photographing its istorikotita in a naval history that gives birth to museum and collector's value.... in the hope not to be ignored again by finding the lost Light of....... and next to the wave again its history...
Click to expand...
Source - ekafalonia.gr
You must log in or register to reply here.
Share: Facebook Twitter Pinterest WhatsApp Email Link
Top